A Lesson in Knowing Your Audience

The band knows who is watching.

Partner and Interactive Director, Jeff Ruprecht, loves the band Radiohead. Like, loves them. This past week, the band launched their 9th studio album and first in almost 5 years, online. This wasn’t the first time they have done this, launching 2008’s InRainbows and 2011’s The King of Limbs via the internet only. In fact, they blazed a trail for artists breaking away from large record contracts by not only offering InRainbows online, but for a price set by the user “buying” it. A “name your price” option which was unheard of then and probably would still be today. 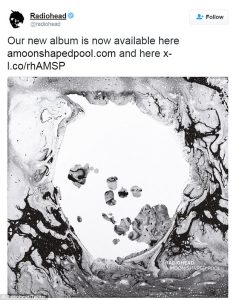 Their voice and actions have followed suit and for their latest, A Moon Shaped Pool, they did things their own way again which has become a lesson in knowing your audience. And we like it.

Radiohead has been teasing new material through blogs, social media and online fan hype for the past few years. Connecting so much with their fans, that when something out of the ordinary is said or done online, the whole community watches and listens while holding their collective breath.

When the band started circulating direct mail newsprint via snail mail just days before the online launch, their fan community noticed. Not only was it the first real message regarding their upcoming new album, it was sent snail mail. The most un-Radiohead like thing that they could do when all know their track record with the internet. Then, just as the world noticed the direct mail, Radiohead erased its website and its Facebook and Twitter histories. Now there is definitely something going on!

The internet chatter picked up even more and created an anticipation that nobody really knew how long of a wait they would endure. Articles were written, shared and liked while die-hard fans spouted their own theories of what it all meant. It was electric.

The very next morning, the world awoke to a stop-motion video accompanied by the first song to be included in the upcoming album. And not just any video, but one in the same aesthetic as mid-century Saul Bass and much more sinister. It was almost jaw-dropping in its own beauty and message that had fans clamoring for more, including our very own Jeff. Next day, another release. This one also accompanied by a video, but one of Thom Yorke searching for something and again creating more questions than answers.

To end the latter portion of the week of activity, it was announced that their new album would be released on Sunday, May 8th, digitally. The wait was over, but the anticipation reached a feverish pace that their audience ate up and delivered their art in the way they are known to.

Now not every organization or business is known as the “Beatles of their generation”, but staying true to who they are proved to delight hard core fans. This is a true tale in knowing one’s audience so well and delivering ‘the brand” to those watching in a way that they are delighting and nurturing their core relationship. Throw in an excellent album (product) and they are ripe to provide an equally satisfying experience going forward.